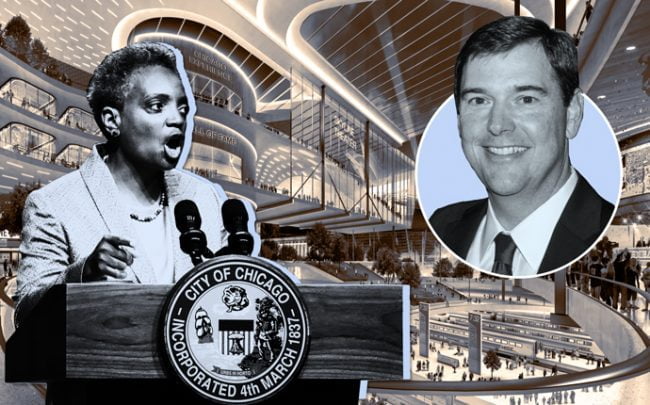 By John O’Brien, The Real Deal

Landmark’s One Central plan not winning over Lightfoot

Mayor Lori Lightfoot took another shot at Landmark Development’s proposed One Central megaproject in the South Loop, questioning the need for the transit hub billed as its anchor.

The $20 billion, 34-acre One Central would be built on a deck over Metra tracks west of Soldier Field and include a transportation hub that would serve Metra, CTA, Amtrak and buses. “I’m not sure that having a transportation hub in that area is a priority for us,” Lightfoot said at an unrelated press conference. Landmark Development did not immediately respond to a request for comment. [Curbed]

Collection of lakefront apartment buildings up for sale

The owner of an 11-building apartment portfolio along the lakefront in Rogers Park is looking to cash out. The 181-unit Collection on Eastlake Terrace was assembled over two decades by Michael Kathrein. His widow, Victoria, is manager of current owner Lee Street Management, which is listing the properties without an asking price. Chicago-based brokerage The Kiser Group was hired to market the buildings. [Crain’s]

The City Council approved financial incentives for an $11.8 million effort to build artist housing in Humboldt Park. The Nancy Franco Maldonado Paseo Boricua Arts Building at 2709 West Division Street is a joint venture between Brinshore Development and the Puerto Rican Cultural Center. It will feature 24 units marketed toward artists and other neighborhood residents earning up to 60 percent of area median income. The ground floor will include an art gallery, a small theater and a commercial space. [Curbed]

The Ledge at Blackstone Group’s Willis Tower reopened after giving visitors a bit of a scare earlier this week. The glass viewing box near the top of the skyscraper at 233 South Wacker Drive extends four feet out from the building, about 1,350 feet above the ground, giving visitors the impression they’re standing on air. But protective coating on the glass cracked Monday, prompting its closure. A building spokesperson said it was just the coating that cracked, not the underlying glass that supports visitors. The coating was fixed and the attraction reopened. [Chicago Tribune]

Schaumburg officials approved plans by a Houston-based developer to tear down the vacant Discovery Office Park and build a rental complex in its place. The village board rezoned the property at 1014 East Algonquin Road to allow Finger Development to build the 373-unit, 444,000-square-foot complex. Construction on The Algonquin at Old Plum Grove project will begin later this year. [Daily Herald]