Why Whiting, Indiana Should Be on Your Multifamily Investment List By Kyle Sissell 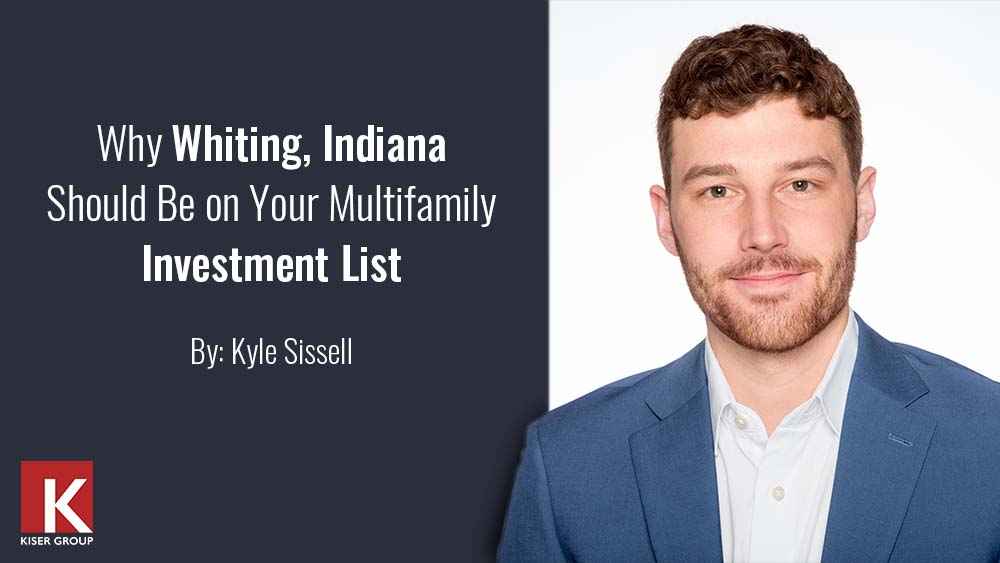 Whiting, Indiana is a little-known community for most Chicagoland multifamily investors. Located in the Northwest Indiana market, Whiting is surrounded by speculation on the heels of continual public and private investment initiatives. From new developments, value-add opportunities, to appreciating assets – here is why Whiting should be on your multifamily investment radar.

Covering just 3.2 square miles in the northwestern-most corner of Lake County sits Whiting. The city was incorporated in 1895 and is home to 5,000 residents. The City of Whiting is synonymous with Hammond as much of the Robertsdale neighborhood, a Hammond outlier, falls under a Whiting home address and both occupy the stretch of land north of the Indiana Toll Road.

Located 16 miles southeast of Chicago, the city is infamous for its weekend-long Pierogi Fest spanning much of 119th Street in Downtown. It’s bordered by Lake Michigan to the north, Wolf Lake to the west, with East Chicago, refineries, and steelyards to the east. The city is also home to the Mascot Hall of Fame and Whihala Beach with Whiting Lakefront Park. Whiting residents enjoy a small-town ambiance with big city offerings just minutes away; all along the pristine Lake Michigan lakeshore.

As is the case with most of Northwest Indiana cities, Whiting has easy access to a large network of Interstate and State Highway roads. Nearby Interstate Highways include I-65, I-90 the Indiana Toll Road, I-94, and I-80 all of which provide options for the 30-minute drive to Downtown Chicago or three-hour road-trip to Indianapolis.
On a local level, the grid includes highways 12, 20, and 41 with each playing part in the ideal travel throughout the greater Whiting area.

Being a smaller city in the area, Whiting has no exclusive provider for bus transportation, but they are serviced by Hammond’s Line 1 bus route. The South Shore Line operates its daily commuter train line at one nearby location – Hohman Avenue in Hammond. Additionally, Amtrak conducts two daily ‘Wolverine’ trips from Chicago’s Union Station to Detroit with a stop at the Hammond-Whiting station. Should citizens be interested, a short five-minute drive over the Calumet River offers the option to ride the Orange Line for access to Metra lines around the greater Chicagoland.

Property Taxes – From a tax perspective, Whiting has various reasons an investor may want to consider opportunities in this market. Indiana real estate taxes are low, the state is at a tax cap of 2% on the assessed value for rental properties with exceptions based on voter referendums.

With such a small data set of properties and units available, there’s limited information from third-party sources such as CoStar, RENTCafé, and Zumper. To summarize, nearly 85% of the rental market is composed of one-bedroom and two-bedroom units with the average rent settling at approximately $1,100. Rent ranges within the city trend on average from $800 to $2,000 depending on size, finishes, location, and amenities.

Existing building stock is made up of dated buildings from the 20th century; only 56 total units are new construction built within the last five years. One of the latest offerings is the Illiana Apartments, which Kiser Group is marketing.

Whiting’s overall population hasn’t grown much, although outside interest expands alongside the focused efforts of renovating and reimagining the city’s offerings to attract newcomers. This includes renovations to Downtown, Whiting Lakefront Park, Oil City Stadium, and more.

The main driver of growth behind Northwest Indiana is the high cost of living in Chicagoland and political whirlwinds causing renters and homeowners to seek change. As residents continue to seek proximity to Chicago but shift to work-from-home jobs, Whiting will inevitably land on their radar.

Furthermore, the rise in industrial, commerce, and warehousing jobs in the surrounding industrial parks and steelyards will continue to bring housing demand and high-paying jobs to the area over the years.
With all factors accounted for, physical vacancy rates are down to just 5% in the market, and due to Indiana’s open eviction policy throughout the pandemic; economic vacancy is likely in the single digits as well but there’s no verifiable data on this topic.

With fewer opportunities to enter the small but strong Whiting market, this city’s investors will see a steady demand for renters and appreciation, backed by continued investments in the community’s offerings and outside investors looking to purchase. There will be plenty of opportunities for both new investors to capitalize on and current owners to benefit from market demand.