Why Hammond, Indiana Should Be on Your Multifamily Investment List 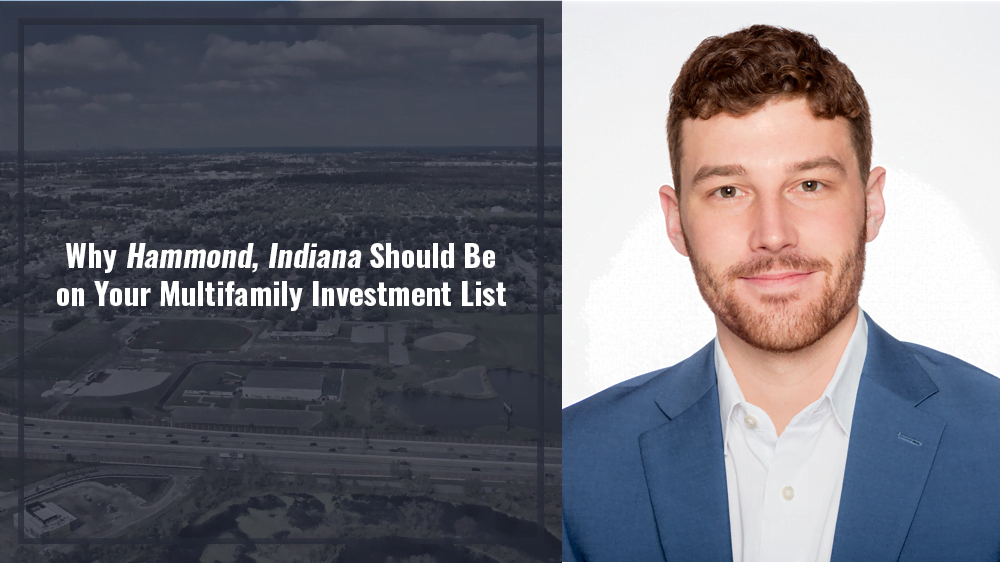 Where should you invest in multifamily real estate? One place that should be at the top of your list is Hammond, Indiana. Hammond is another Chicagoland market surrounded by speculation on the tales of numerous public and private investment initiatives. From new developments to value-add opportunities to appreciating assets – here is why Hammond should be on your multifamily investment radar.

Located in the northwestern corner of Lake County, Hammond is positioned a mere 15 miles from downtown Chicago. Founded in 1884 and named after George H. Hammond, it’s the largest city in Lake and Porter County, with over 77,000 people – and growing.

The city stretches 23 square miles in an ‘L’ shape along the Illinois-Indiana border, with its northern border reaching Lake Michigan. Illinois borders the city to the west with Gary, East Chicago, and Whiting to the east, plus Munster and Highland to the south. Since its inception, Hammond has been a diversified city, home to numerous industries, universities, schools, employers, and neighborhoods.

Hammond promotes safe and efficient travel throughout the greater Chicagoland area thanks to its premier location. Citizens traveling by car and bus have access to I-65, I-90, the Indiana Toll Road, and the Borman Expressway, which is the convergence of I-80/I-94.

From a local level, the bus system has faced troubles in the past. Currently, no company services Hammond exclusively. Instead, limited routes are operated by the Gary Public Transportation Corp. through their Tri-City initiative, while Pace Buses are used for transport into downtown Chicago alongside other private companies.

Today, there are currently two train companies operating within city limits. The South Shore Line operates their daily commuter line at one location – Hohman Avenue. The most recent news is the approval of new train lines, stations, and rails as part of the West Lake Corridor expansion into Northwest Indiana. This will add a new Hammond Gateway Station near Brunswick Street and a second brand new train station in Hammond at 173rd Street. Additionally, Amtrak conducts two daily ‘Wolverine’ trips from Chicago’s Union Station to Detroit with a stop at the Hammond-Whiting station.

Property Taxes – From a tax perspective, there are many reasons an investor may want to consider opportunities in this market. Indiana real estate taxes are low. The state is at a tax cap of 2% on the assessed value for rental properties with exceptions based on voter referendums.

Due to the West Lake Corridor expansion and other voter referendums, taxes are on the rise. There are two approved referenda in Hammond. The first being an operational referendum active until 2024, which runs at a 0.44% rate. The second is a building construction referendum that is not yet active and carries a maximum increase of .3598%. When all referenda are active, the sum will include the 2% State Tax Cap, up an estimated 0.03% from last year’s total.

Indiana is a landlord-friendly state, and Lake County allows efficient methods with optimal timelines to evict troublesome tenants. The cost of an eviction is dependent on the cause, and non-payment evictions are the most common.

As is the case with many other Northwest Indiana markets, Hammond continues to see new capital invested primarily towards value-add plays that consist of expenditures on deferred maintenance and amenity focused renovations.

One-bedroom and two-bedroom units account for approximately 80% of the Hammond rental market. Vacancy rates remain around the 3-7% mark with a rough average of 1.6% Y-o-Y rent growth, both of which are dependent on the time of year.

CoStar, one of the largest third-party data sources, sites that the effective market rent per unit, or the average of all the leases that were signed via their subsidiary websites, landed in this range:

Hammond is a low barrier to entry city with steady velocity, low unit prices, and a large tenant base. The city’s landscape is changing, focused on the redevelopment of Historic Downtown Hammond and nearby neighborhoods. Dependent on location, investors are likely to find a range of Class C to Class B neighborhoods and buildings. Overall, the value-add opportunities involve the appropriate unit updates and rent increases, allowing owners the opportunity to increase income and equity within their properties.

Warehousing and storage are also abundant, both ExxonMobil and Marathon Petroleum have oil storage facilities in Hammond, and FedEx has a distribution hub within city limits. Indiana Harbor Belt Railroad is also headquartered in Hammond alongside other rail yards.

Historic Downtown Hammond leads the charge for Transit-Oriented Development plans (TODs) and a more walkable downtown, focusing primarily on urban amenities to create a more inclusive and accessible community. Additionally, there has been a lot of attention on the new West Lake Corridor Expansion and the addition of the two new train stops within Hammond city limits.

Along with these advances, the Regional Development Authority and Hammond have outlined plans for areas affected by the new train lines and stations, known as Transit Development Districts (TDDs). These districts will collect a percentage of property tax and income tax revenues from a ½ mile area around each train station. Revenues from each district must then be re-invested back into its initial TDD for infrastructure improvements and private development incentives.

Hammond and Northwest Indiana, as a whole, continue to see investor interest expand. The impending rise in the cost of living and owning rental properties in Illinois are continually pushing investors to find new markets. With a lot of positive change on the horizon, Hammond will deliver investors opportunities to make great returns. Please give me a call at 219-246-9026 if you would like to further discuss the multifamily investment market in Indiana.