Why Crown Point, Indiana Should Be on Your Multifamily Investment List 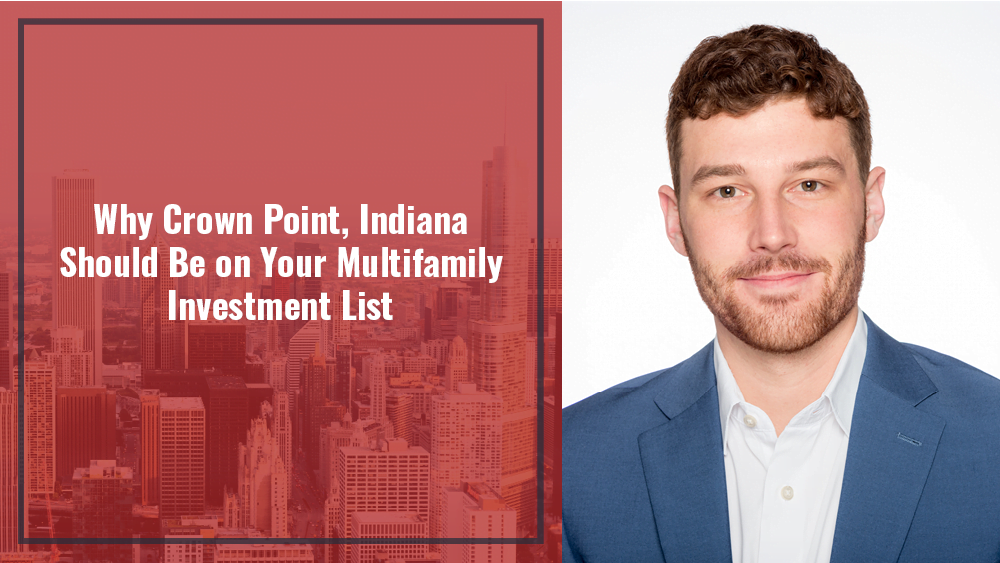 This month I’m highlighting Crown Point, another Northwest Indiana market surrounded by speculation on the tails of continual public and private investment initiatives. From new developments, value-add opportunities, to appreciating assets – here is why Crown Point should be on your multifamily investment radar.

Covering 18 square miles in the heart of Lake County sits the county seat of Crown Point, the city was incorporated in 1868 and is home to nearly 30,000 residents. Nicknamed “The Hub” the city has played a pivotal role in the growth and stability of Lake County, Indiana over the past century and a half.

Located 34 miles southeast of Chicago, the city is neighbored by a number of large towns that include Schererville, St. John, and Cedar Lake to the west – with Merrillville to the north and Lowell and Hebron to the south.

Crown Point lives up to its nickname of “The Hub” with an effective network of Interstate and State Highway access points. Nearby Interstate Highways include I-65, I-90 the Indiana Toll Road, I-94, and I-80 all of which provide options for the hour-long drive to Downtown Chicago or two-hour road-trip to Indianapolis.

On a local level the highway grid includes 2, 30, 41, 53, and 231 each playing part in the ideal travel throughout the greater Crown Point area.

The city has no exclusive provider for bus transportation, although there have been plans brought up in several of the past Northwestern Indiana Regional Planning Commission meetings. Much like Hammond, limited routes are operated within Crown Point by the Gary Public Transportation Corp. they run the Broadway Metro Express route servicing the northern part of Crown Point.

In order to access the South Shore Line train, citizens travel north to stops located in Hammond, East Chicago, and Gary for transport into Downtown Chicago and east to South Bend.

From a tax perspective, Crown Point has multiple reasons why an investor may want to further consider purchasing in this market. For one, Indiana real estate taxes are set at a state mandated tax cap of 2% on the assessed value for rental properties – with additions or exceptions based on voter referendums.

The city is growing, and officials are organizing the potential construction or renovation of several school buildings. While this is good change that will accommodate the population growth, be on the lookout for rising taxes over the coming years.

Indiana is a landlord friendly state, and Lake County allows efficient methods with optimal timelines to evict troublesome tenants. The cost of an eviction is dependent on the cause, and non-payment evictions are the most common.

Yes, Lake County is allowing evictions – tenants are required to show proof of hardship during the pandemic or a COVID related reason they are unable to pay rent. If no proof is available or an agreement is not met, landlords can begin the eviction process although the success rate is still low.

On track with many other Northwest Indiana markets, Crown Point continues to see new capital and interest from all over the country with Chicago investors leading the charge. While this city tends to be home to higher rated properties the capital continues to focus on value-add plays through cosmetic improvements, amenity additions, and operations of multifamily buildings.

The city is composed of about 80% owners and 20% renters. Vacancy rates for the rental market hover in the 4-6% range. Rent growth from Q1 of 2020 to Q1 2021 marked a strong 6% increase, which reported a 6.5% rent growth compared to Q1 2019. Other rental data tracking websites have placed Crown Point in the 10-12% rent growth range over the past year as well.

In total approximately 50% of the rental market in Crown Point is two-bedroom units, with about 40% being one-bedroom units – the remaining 10% is composed of studios, three-bedrooms, and four-bedrooms.

A number of market forces have urged Crown Point growth over the past year, including working from home and constricting taxes and rents in Chicago. Tenants have begun the search for housing in Northwest Indiana where rent is cheaper and includes a more spacious unit in comparison to Illinois towns.

CoStar, one of the largest third-party data sources, sites that the effective market rent per unit, or the average of all the leases that were signed via their subsidiary websites, landed in this range:

Breaking it down further, the average price per square foot:

*There is a very limited number of studios in Crown Point, therefore data estimates mark anywhere from $1.50 to $2.90 in rent per square foot on studios due to a number of differences including size, amenities, and location.

In comparison to Hammond and Gary, Crown Point is a higher barrier to entry city for investors attempting to buy and tenants looking to rent. The city continues to build and renovate properties in the Class B to Class A ranges. Most value-add opportunities arise from a change in long-term ownership that focused on high occupancy with low rental rates. New ownership aims for substantial rent growth through cosmetic updates and small amenity additions such as washers and dryers in units.

Otherwise, this market will continue to see steady rental growth well into the future and rental demand is projected to mirror this increase as well.

Crown Point’s job market is smaller compared to neighboring cities due to their population size and employs an estimated 14,00 people. The employment landscape is made up of primarily of health care and service-oriented businesses. Also topping the charts are manufacturing and education-related fields.

Much of Northwest Indiana is pro-business and have sought out several Illinois companies for relocation to Lake County through tax incentives or other measures, this includes encouraging the start-up of local businesses that serve their fellow citizens as well.

Crown Point has its fair share of redevelopments underway; the population has grown nearly 1.5% each year for the past decade and is projected to continue on that trend. The largest ongoing plans include the new Franciscan Health hospital, an estimated $200M development set to be delivered in fall of 2023. It will be a “state-of-the-art centerpiece” in a larger medical and educational facility campus just off I-65 and 231.

The city also plans to build a new Taft middle school, scheduled to open in 2024 on the east side of I-65. Blueprints currently aim for a capacity of 1,400 students on nearly 100 acres of land and is in cohesion with Crown Point’s Community School’s corporation aim for $215M in expansions, renovations, and technology upgrades to a number of schools in the district – including Crown Point High School expansions.

Lastly, a number of subdivisions are in the development stages across several areas in Crown Point, and the potential relocation of Andrean High School to Crown Point soil has been rumored for several years now (it is currently located in Merrillville off Broadway).

Crown Point is a major part of Northwest Indiana’s changing landscape, as Illinois and other Midwest states continue to become overpriced Indiana’s interest grows. The rising cost of living, income tax, and property tax in Illinois has already urged citizens and tenants to begin the move into Northwest Indiana. This has only been catalyzed as of late by the ongoing pandemic and flexibility in working from home, where Indiana families’ dollars go further in renting and cost of goods.

The ongoing push for Crown Point to continue its redevelopment and welcome growth will provide a number of opportunities for investors to make great returns in the future.