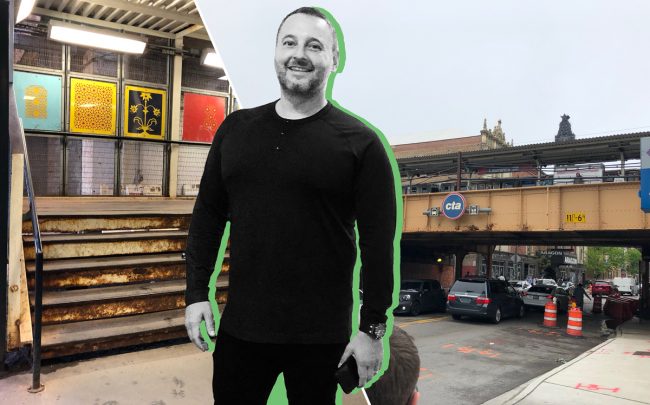 Like a lot of multifamily brokers in Uptown and Edgewater, Rick Ofman of the Kiser Group was shocked last week to learn CTA reconstruction projects are set to knock the Lawrence and Berwyn Red Line stations out of commission for at least three years. The drawn-out plan would be sure to scramble the efforts of real estate pros who are “always touting proximity to the nearest L” station in their marketing for apartment buildings, he said.

But then he polled some of the local apartment owners he represents, and they offered a different take.

“Logically, I think when you’re closing down two major stations like this, it has to have a negative effect on day-to-day business,” he said. “But I have yet to talk to a landlord who says they’re concerned.”

The owner of one building a short walk from the Lawrence station told Ofman many of his tenants already walk an extra 10 minutes to the nearby Wilson stop, “because it’s so much nicer,” the broker added.

Fresh off a three-year, $203 million reconstruction project, the gleaming Wilson station offers a sharp contrast to Lawrence, which sends passengers up a chain-enclosed stairwell to a narrow, wood-paneled platform.

The CTA plans to shut down the Lawrence, Argyle, Berwyn and Bryn Mawr stations starting next year for work that might not wrap up until 2025, according to an updated schedule published last week. In the interim, the city will create temporary stations at Argyle and Bryn Mawr.

Brokers, landlords and businesses are bracing for an inevitable sting from the years-long project, even if it boosts the neighborhoods’ value in the long run.

The closures could especially spell trouble for local retailers and could temporarily make it harder for surrounding landlords to hike rents, according to Frank Maguire, a Baird & Warner broker who sells homes along the city’s north lakefront. “People tend to rent on a two- to four-year horizon, so you’d have to think that not having a Red Line stop for that entire period is going to impact their decision-making,” Maguire said.

“But for homeowners,” he added, “it’s going to be terrific.”

Anyone who buys a home in Uptown or Edgewater today must consider that “when it comes time to sell in five to seven years, they’ll be looking at upgraded services,” Maguire said.

It’s a far cry from Brooklyn, whose housing market was thrown into turmoil after a 2016 announcement the MTA would shut down the L train for more than a year. Gov. Andrew Cuomo reversed course on the shutdown last month, inviting a surge in leasing activity.

Since Lawrence and Berwyn are each about a 10-minute walk from their closest neighboring stations, “it’s not like anyone is going to be stranded,” said Roman Serra, a multifamily broker with Spaces Invest. Serra predicted the closures will impose, at most, a 5 percent discount on apartments surrounding the two stations. That would hardly be enough to drag down the market in Uptown, whose median rent jumped by nearly 7 percent between April 2016 and 2019, according to Zillow.

Prices may dip “a little bit” for walk-up condos in the $250,000 to $400,000 price range, said Julia Stoner, Serra’s partner at Spaces, “but if a courtyard building becomes available, investors are going to jump on it whether a station is down or not.” The brokers added the Lawrence closure might create a headache for Cedar Street Companies, which is cultivating a small apartment empire around the station. Along with the 344-unit Lawrence House building it opened in 2015, the company will soon add the Bridgeview Bank building and a planned ground-up development at 4750 North Winthrop Avenue to its crop of apartments within a stone’s throw of the Lawrence stop.

But Alex Samoylovich, co-founder and CEO of Cedar Street, doesn’t expect to lose any tenants over the transit overhaul. Lawrence House has seen “stronger-than-expected retention,” with more than half of tenants sticking around at least two years, he said.

The building, about a block from the train station with no interior parking spaces, was “designed for a transit-oriented demographic,” but its amenities and relative proximity to the next-nearest station could be enough to keep renters on the hook.

“We’re continuing to see much stronger rent growth on the North Side than in core markets, and occupancies have continued to stay extremely strong,” Samoylovich said. “And the inconvenience of walking to Argyle is going to be worth it for a major revitalization.”

The Lawrence House markets 250-square-foot studios at rents starting around $1,100 each. The building is “hovering around 97 percent occupancy,” Samoylovich said.

Major investors like Cedar Street may be equipped to weather the coming storm, but mom-and-pop retailers near the stations could have the most to lose during the reconstruction.

Coffee shops like Chicago Grind, at the corner of Broadway and Berwyn Avenue, will lose precious foot traffic from the hundreds of commuters who pass by on their way to the train each morning.

Combine that with more common impacts of construction, like piercing noises and fences that block pedestrian access, and some small businesses could struggle to stay open, according to Martin Sorge, director of the Uptown United business group.

“Restaurant margins are so thin, little things like that can have a big impact,” Sorge said.

Uptown United is encouraging small businesses to ramp up their marketing and band together to stay close in touch with city transportation planners, the same way they did during the Wilson station reconstruction.

“Businesses have obvious concerns, but they see the value in updating our infrastructure,” Sorge said. “They recognize that this is going to potentially be 100-year investment, so we’re making sure we’re supporting each other through this five-year extravaganza.”