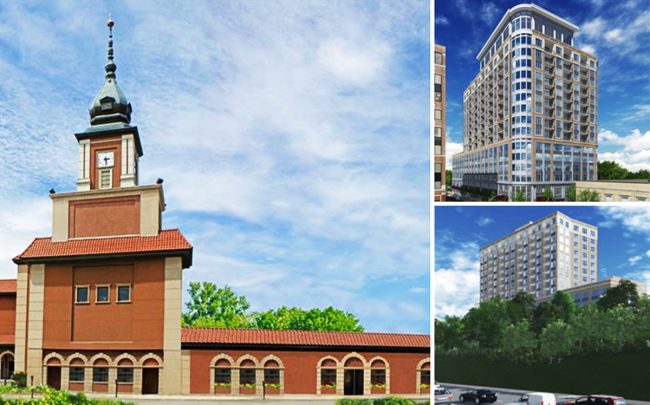 Jefferson Park’s identity crisis had been brewing for years, but it wasn’t until 2015 that the crisis got names and faces.

That’s when a new pro-development neighborhood group called Jefferson Park Forward broke from the broader base of older residents who wanted to maintain the neighborhood’s small-town feel at all costs.

Jefferson Park Forward sprung from the rise in young families who moved there, drawn by the relatively inexpensive bungalows and top-rated public schools. They are hungry for the kinds of pedestrian-friendly amenities that abound closer to Downtown.

The split between the longtime residents and their newer neighbors has been widening since the 2011 election of Alderman John Arena (45th), who came into office on a platform of inviting denser development around the massive Jefferson Park Transit Center.

His vision is slowly taking shape, with three residential developments expected to open more than 200 combined apartments near the station in the next few years. A fourth proposal, for 75 residential units a few blocks north, has given Jefferson Park’s local drama over affordability greater citywide attention.

Settled mostly by German immigrants in the mid-1800s and annexed into the city in 1889, Jefferson Park has since earned a reputation as a sleepy suburb-in-a-city where cops and other city workers lay their heads.

The area grew out around the 1,890-seat Gateway Theater, which was built in 1930 and redeveloped in 1979 as a Polish-American cultural destination. Known today as the Copernicus Center, the venue still draws big-ticket performers to the neighborhood most weekends. The Chicago Fringe Festival moved to Jefferson Park in 2013, crashing a week-long wave of avant-garde art over the neighborhood for a week every August.

The area’s main commercial drag near Lawrence and Milwaukee avenues, once packed with immigrant-owned bakeries and other small shops, is today riddled with empty storefronts. The strip took its most recent major hit in 2016, when the beloved Fischman’s Liquors moved down Milwaukee to Portage Park. At Alderman Arena’s urging, the Regional Transportation Authority got to work last year on a “master plan” that would sketch out an official blueprint for new development surrounding the transit center. A draft of the plan, released in May, proposes a suite of transit-oriented residential developments and a “pedestrian plaza” in the district.

The posh Weston’s Coffee & Tap Co. opened in December across the street from the transit center, fueling speculation that more high-end businesses would trickle into the block of mostly fast-food drive-thrus. A few blocks west, the neighborhood is about to get its first Starbucks at Lawrence and Central avenues.

With about 20,000 daily passengers, the Jefferson Park Transit Center handles more traffic than almost any other station outside Downtown. (Only the 95th/Dan Ryan terminal on the Far South Side beats it.) The CTA Blue Line, Metra’s Union Pacific Northwest line and 12 bus routes converge at the superstation near Milwaukee and Lawrence avenues. The transit center is due for a $25 million facelift starting later this year, set to give wheelchair-users full access to the train platforms.

Also this year, the Pace suburban bus agency plans to launch its first “Pulse” express line between the transit center and suburban Niles.

Jefferson Park is bisected diagonally by the Kennedy Expressway just west of where the highway splits off from the Edens Expressway, giving drivers direct routes to both O’Hare Airport and northern suburbs like Skokie and Northbrook. “Jefferson Park is getting a lot of first-time homebuyers, and condo-owners looking for their first house. It’s one of the only neighborhoods still affordable enough for people looking to start a family, ” said Rory Fiedler, a residential broker with Redfin. “It has great schools, more parks than most other parts of the city, and the transportation is outstanding. It’s got a suburban feel, and property taxes get a lot lower for someone who moves there from, say, Lincoln Square.”

“It’s a middle-class neighborhood, with a lot of workers who commute Downtown or to the northern suburbs,” said Jake Parker, an apartment building broker with the Kiser Group. “There’s a good supply of multifamily buildings that haven’t been renovated in a while, so a lot of investors are coming in to try and put in that money and bump rents. Most unrenovated one-bedrooms go for around $900 [per month], but you can put some money in and get that up to $1,200 pretty easily. Investors are getting better returns there than neighborhoods like Wicker Park and Logan Square, which are becoming oversaturated.”

Most expensive home on the market

Least expensive home on the market

Mega Realty broke ground this spring on a 39-unit apartment building across the street from the Copernicus Center, covering up a vacant lot developers have been eyeing for at least a decade. The building is projected to open next year.

Mega is also behind the 114-unit Jefferson Place apartment complex, which at 16 stories would tower above every other structure in the neighborhood. The building would also include 10,000 square feet of ground-floor retail. Approved by the city last year, the project is now awaiting permits.

American Colony Homes got zoning approval in late 2016 to build a pair of 24-unit apartment buildings facing the north side of the transit center. The development has not yet received its permits.