The Real Deal: Neighborhood Spotlight: Hegewisch and East Side are banking on an industrial revival 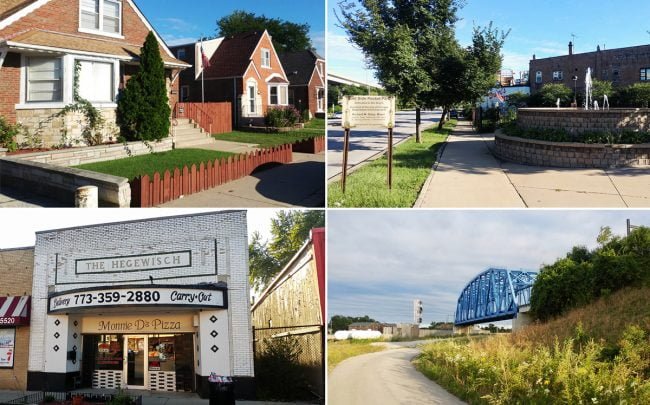 By Alex Nitkin | Research by Laura Hanrahan, The Real Deal

Even lifelong Chicagoans could be forgiven for thinking they’ve crossed into small-town Indiana when they take Ewing Avenue past 100th Street.

But in some ways, the lunch-bucket communities of East Side and Hegewisch are as Chicago as you can get: small shops and gilded-era workers cottages, built for organized steelworkers and maintained by off-duty cops and firefighters.

The area bears an architectural resemblance to other outskirt neighborhoods like Dunning and Mount Greenwood, with corrugated metal houses mixed among brick bungalows and American foursquares.

But unlike those neighborhoods, the Southeast Side boasts hundreds of acres of undeveloped land, with plenty of protected natural scenery to boot. East Side abuts the lakefront with the 200-acre Calumet Park, and Hegewisch is surrounded by huge swathes of marshland preserved by city, state and county agencies.

The industrial-era enclave has been on a slow decline since the offshoring days of the 1970s and ‘80s, and the enduring vacancy of the nearby 440-acre South Works site remains an ominous sign for investors. But now that warehouse developers in the region can’t seem to staunch their hunger for more space, the Southeast Side could be in perfect position for a rebound.

In 1883, steel magnate Adolph Hegewisch picked a remote stretch on the east bank of the Calumet River to build a company town, vowing to build a canal that would connect the nearby Wolf Lake to Lake Michigan.

The canal never materialized, but Republic Steel and other manufacturers followed Hegewisch and opened factories along the river in the 1900s and 1910s, juicing home construction for the Eastern European immigrant workers who poured their metal. About two miles up the river from Hegewisch, steelworkers formed another bedroom community they called East Side.

As the metals industry expanded in the 1920s and ‘30s, the Southeast Side became a hotbed for union organizing, eventually giving rise to the powerful political submachine that produced City Council titan Ed Vrdoylak. Sue Sadlowski-Garza, daughter of United Steelworkers of America leader Ed Sadlowski, was elected alderman of the far-reaching 10th Ward in 2015.

The area’s economic fortunes turned with the American steel industry’s decline in the 1970s, and both Hegewisch and East Side began to bleed population. Republic Steel wound down its production through the 1980s, and U.S. Steel shut down South Works in 1992.

But the neighborhoods stayed afloat in part thanks to Ford’s 2.8 million-square-foot auto plant, which has been pumping out cars at 126th Street and Torrence Avenue since 1924.

And this summer, the Missouri-based Northpoint Development announced plans to build a nearly 200-acre campus of spec distribution warehouses along the west side of Avenue O, the main connector between East Side and Hegewisch. City leaders agreed to kick $25.3 million from the Lake Calumet tax increment financing district into the $169 million project.

East Side is bisected by the Chicago Skyway and Hegewisch offers quick access to the Bishop Ford Expressway, both of which can get drivers to the Loop in 25 minutes on a light traffic day.

The Metra Electric Line only runs west of the Calumet River, but the Indiana-based South Shore Line branches out from the Metra tracks around 130th Street and stops in Hegewisch on its way to South Bend.

Both Hegewisch and East Side are served by the CTA No. 30 bus, which trails down Ewing Avenue and Avenue O. The part-time CTA No. 100 bus shuttles passengers between East Side and the 95th/Dan Ryan Red Line station via 106th Street.

“It’s a working-class neighborhood, and a lot of city workers live there because they can get a great affordable house with good schools and lakefront access,” said Louis Silva, an @properties broker who sells homes primarily on the Southeast Side. “You can get a rehabbed single-family home for under $200,000, although that number is now starting to push up. The average price for a fixed-up four-bedroom is around $185,000, which is a little over 2006 levels. We’ve traditionally lost out on a lot of retail and commercial because we’re so close to the Indiana border, but with all this new industrial, those employees are going to want to eat and go out. So hopefully some of those neighborhood bars are going to reopen.”

“It’s a very industrial-driven part of the city, and when you get that far east it gets a little dead in terms of multifamily” buildings, said Aaron Sklar of commercial brokerage Kiser Group. “But with so many big speculations going on, I think a lot of people are betting on new multifamily and single-family from the jobs that would inevitably come from that. A lot of that doesn’t exist yet, but I expect to see a huge uptick in both residential and commercial prices in the next few years.

“The East Side is similar to the rest of the South Side in that investors are looking for cash-on-cash returns, and you have a handful of out-of-town developers coming in because of these [capitalization] rates that are just unheard of in most of the country.”

Most expensive home on the market

Least expensive home on the market

East Side registered a July median sales price of $120,000, up 14 percent over last year