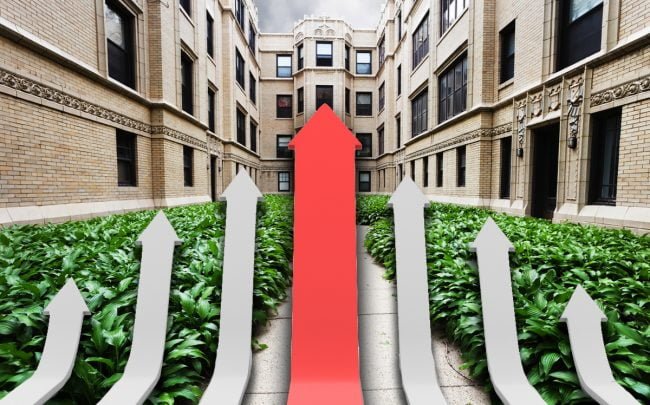 Rogers Park might be on the way to losing its reputation as an affordable North Side refuge.

The median rent for a one-bedroom apartment jumped by more than 8 percent since last year in some parts of the neighborhood, with average rents nearing $1,300 a month near the CTA Red Line, according to a report from apartment listing service RentHop. The report looked at the median rent in a randomized sample of 50 one-bedroom apartment listings within about a half-mile or mile of each of the city’s 145 L stations. Citywide, it measured a 3.7 percent spike in one-bedroom rents.

Some of the steepest rent hikes were recorded near the Loyola Red Line station, where it was common to see rents rise by as much as $200 from year to year, according to Shane Lee, a data scientist at RentHop. Lee pointed to one building, the 152-unit apartment complex owned by the Laramar Group at 1209 West Arthur Avenue, where one-bedroom rents last year were just over $1,600 per month but jumped past $1,800 this spring.

Costs spiked nearly as quickly near the Morse station, where the median rent climbed by about 7 percent. Last year, researchers found multiple one-bedroom apartments renting in the area for $900 or less, Lee said. This year, they found none.

“These numbers are somewhat reasonable if inventory is tight, so this points to a shortage” in available housing, Lee said. “That could help explain why we’re starting to see developers focus more on this neighborhood.”

Ironically, the lakefront neighborhood’s reputation for relatively cheap living is likely part of the reason renters are bidding up the prices of its apartments, according to Stevens Haen, a multifamily broker with Kiser Group.

“It’s like anywhere — you have an affordable neighborhood that’s safe, quiet and pretty, and it starts attracting new tenants to the area,” Haen said. “It’s a vicious cycle.”

But Haen added Rogers Park boasts more affordable units than other North Side neighborhoods, many of which barely have any subsidized units. This spring, Three Corners Development completed a 111-unit mixed-use building at Sheridan Road and Devon Avenue with 65 affordable apartments.

Broadening the availability of affordability housing was a key campaign plank for Alderman Maria Hadden (49th), who defeated four-term incumbent Joe Moore in this year’s election.

Property owners have noticed the surging tenant demand and new development — especially near the Loyola station — and many are now renovating their older buildings to catch up, according to Craig Martin, managing partner at multifamily brokerage Interra Realty.

“People have bought a lot of properties around there, gone in and modernized the vintage units up to what current-day users want,” Martin said. “It’s still a significant discount from other neighborhoods … but now you have a new crop of renters coming in who want those stainless steel appliances and stone countertops.”

Rogers Park is the only North Side neighborhood untouched by Lake Shore Drive, making it a less convenient spot for car owners. But that also gives surrounding residents quicker access to the lakeshore, with a near-contiguous stretch of small public beaches.

Parts of Bronzeville neighborhood also saw big rent hikes, the study found. Home prices and building activity have surged on the Near South Side during the past few years, as the neighborhood braces for a series of high-profile new developments.

The area around the Indiana Green Line stop in Bronzeville measured the sharpest year-over-year rent growth of any L station in the city, jumping 8.6 percent to reach a median of $1,100 per month. The adjacent 43rd Street stop was close behind, climbing by 7.8 percent to reach a $1,215 median.

Citywide rent growth could slow down after this year, when some 9,500 new apartments are projected to come online throughout the Chicago region.

Still, recent studies found rent growth is outpacing median income growth in ZIP codes all over the city. Mayor Lori Lightfoot has vowed to keep the city’s affordable housing squeeze from spinning into a catastrophe, but she has yet to unveil any specific policies on the issue.