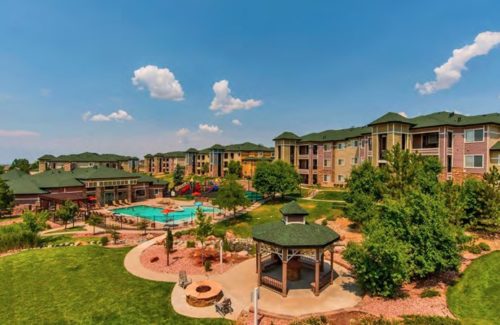 A partnership between Origin Investments and Aegon Real Assets U.S. has acquired Advenir at Saddle Rock, a 320-unit community in Aurora, Colo. The $71.2 million, off-market transaction marks the first collaboration between the two entities. According to Yardi Matrix data, the new owners assumed three existing loans adding up to roughly $60 million and due September 2022.

The community, built in 2002 and formerly an Advenir Inc. property, is situated in the far southeast corner of Denver’s metropolitan area, at 22959 E. Smoky Hill Road. The 350,700-square-foot net leasable space was 95 percent occupied at the time of the transaction. In the fall of last year, Origin made a similar investment when it acquired a 448-unit luxury community in Atlanta.

The 13 buildings making up Advenir at Saddle Rock occupy a 23-acre lot and feature a mix of one- to four-bedroom floorplans. Units range in size from 855 to 1,481 square feet. The community features common-area amenities such as:

The new owners plan to invest sizeable capital in upgrading the asset and take advantage of features which make Advenir stand out, such as the 20 four-bedroom units, a rarity in suburban Denver.

Residents have access to various nearby restaurants and shops, around toll road E-470, including Southlands Mall. The community is situated within the Cherry Creek school district and is also halfway between the Anschutz Medical Campus and the Denver Tech Center. The immediate area offers several public and private transportation options, while downtown is about 30 miles away.