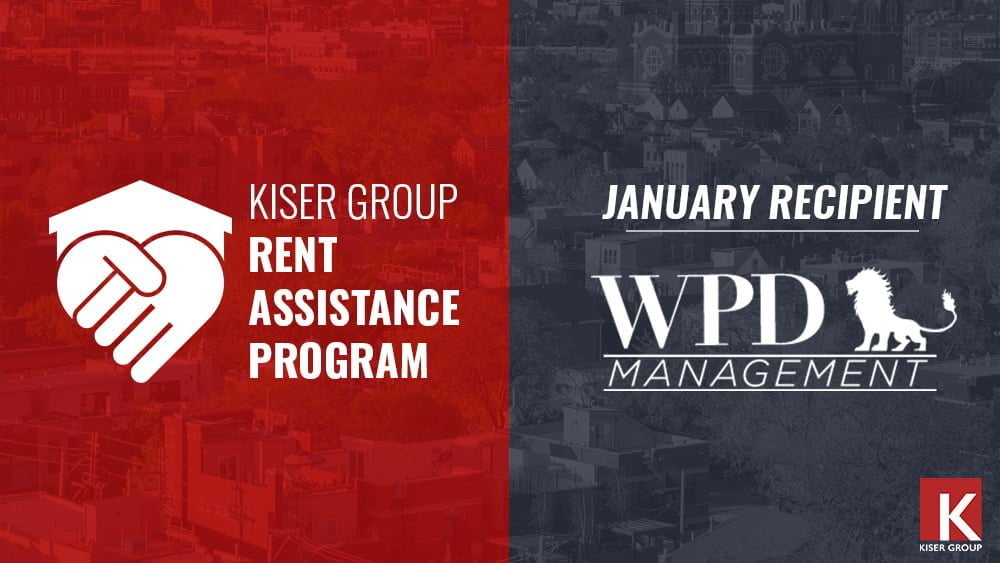 Kiser Group is initiating a year-long campaign to help struggling Chicagoans. Each month during 2021, Kiser Group will pay $2,000 on behalf of tenants in need to Chicago-area landlords or property managers to help cover rent owed. Each month we will document how the money was allocated.

Kiser Group kicked off the new year by working with WPD Management, a property management firm operating throughout the south side of Chicago, to allocate $2,000 in rent credits.

Upon learning about Kiser Group’s initiative, WPD Management contributed an additional $10,000 in rent assistance and one of WPD’s clients, Goldman Investments, also donated $10,000, resulting in a total of $22,000 in rent credits. This amount was allocated to assist 19 different apartment units.

“Kiser Group has several charitable initiatives but given the economic hardships people face as a result of the pandemic, we sought a way to get money directly into the hands of those who need it most. We realized our own clients would know those most in need of help with rent,” said Lee Kiser of Kiser Group. “The snowball effect with WPD and Goldman Investments was a wonderful surprise. We hope to see continued industry support for rent assistance throughout the year.”

After allocating the rent assistance, WPD Management shared a few stories about the impact.

Resident A: She had always paid her rent until December when she lost her job due to Covid. She cried with tears of joy when we gave her the news. She starts her new job in February, and this helped her bridge the gap.

Resident B: A single mother who always paid her rent on time until she needed to cut her hours due to her kids staying home for e-learning. She had tears in her eyes when we gave her the news.

Resident C: This single mother lost her job in November due to Covid, and her hours had been cut before that. She was having a hard time making her payments with the cut hours, but always found a way to be current by the end of the month until she lost her job. Now she is also having issues with receiving unemployment. This rent credit went a long way!

Resident D: They always paid on time until October when their hours were cut due to Covid. Since then they have been having a hard time getting caught up – but still paying all that they can. A relative who had been assisting passed away, making it even harder for them to make payments. Both were extremely excited when we gave them the news.

Resident E: He was laid off due to Covid and having a tough time making ends meet. He is responsible for all of the family’s bills and was extremely excited when we gave him the good news.

Resident F: His hours were cut, and he was having a really tough time. He always keeps us posted with when he can make his payments and how much he can make. He choked up a bit when we gave him the news.

Resident G: He is a great guy, and it has been hard on him not having additional income from coaching basketball this year. He was excited when we gave him the news.

Resident H: He works for a maintenance company that provides janitorial services for commercial buildings. When Covid hit, he lost most of his hours due to everyone working from home. He is back working full time now and trying to catch up on back rent. The donation will help him get to a zero balance by the end of this month. He was extremely excited when he got the news.

Resident I: He is an older veteran with health issues and financial difficulties. When we delivered this notice, he was over the moon and so appreciative. He says he thinks it’s a great opportunity for him to start fresh and feel less weight on his shoulders.

Resident J: She was working two low-paying jobs when she rented her first apartment last year. When COVID hit, she lost both jobs due to the companies closing. Instead of sitting and waiting for things to happen, she hopped around doing anything she could for money to keep the bills paid. She is currently driving for Uber until she can find a more stable income. When we awarded her with the letter of rent assistance, she couldn’t believe it. She cried, thanked us, and called her father with the good news.

Resident K: She works a part-time job and goes to school full time. Her hours were cut in November, and she’s had difficulty staying current on rent. She was extremely grateful when I gave her the good news and stated, “I am literally crying tears of joy right now!! I can’t thank you all enough.”

Resident L: She lost her mother and aunt last April and had to take care of their services, so it put her behind on rent. Then her hours at work were cut. She was extremely surprised by the generosity and continues to thank us. She said she felt like some of the weight and heaviness she’s been dealing with has been lifted and that she appreciated the help, and that she doesn’t feel as overwhelmed.