In Spite of Headwinds, Multifamily Should Charge Ahead Unabated 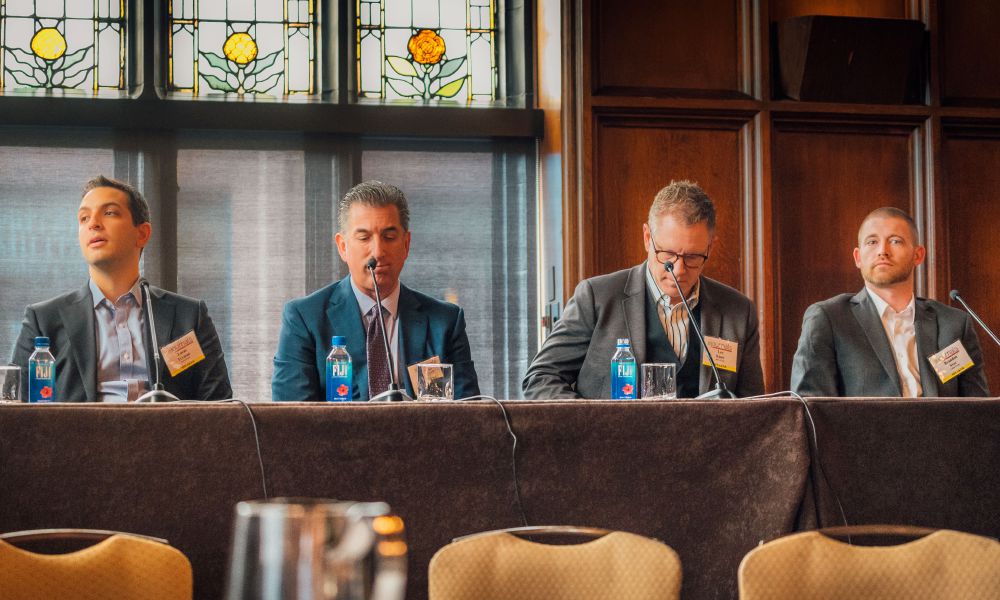 All throughout this cycle, no asset class has matched the transaction volume of multifamily. That’s why nearly 250 people packed into the University Club last week for REjournals’ 11th Annual Multifamily & Apartment Conference.

DeVries delivered a lot of useful information, the key takeaway being, though there has been a lot of development activity, overbuilding concerns are unfounded. New supply is largely keeping in line with absorption, with the Chicago metro seeing between 3,000 and 3,200 new units come online annually for several years now.

Among the topics this panel covered were the likelihood—and implications—of rent control in Chicago, the difference between downtown and suburban TODs and the makeup of investors targeting Chicago’s multifamily stock. On that last point, Kiser reports an uptick in international buyers, who are active on approximately 15 to 20 percent of his firm’s transactions.

Skolnik injected the term “hipsturbia” into the discussion, a portmanteau that tries to understand the shifting residential trends of millennials. As this generation starts to form families, are they going to continue to rent? Can they be persuaded to settle down in suburban downtowns that are cheaper than the urban areas within the city they had become accustomed to?

“The only county in the entire Chicago area that’s gained millennial population over the last 10 years has actually been Will County,” said Svec. “What does Will County have? It has Metra line access, it has good schools and it has a plethora of affordable, relatively newly built housing stock.”

According to Svec, the “hipsturbia” movement hasn’t found a niche in Chicago like it has in other markets around the country. As he points out, a lot of suburban downtown multifamily product is taking way longer than pro forma to lease up.

The discussion ranged from the class A market down to affordable housing. But as Kiser pointed out, there’s a wide spectrum between those asset types, varying from the neighborhood to neighborhood. Smart investors know that there can be value in mid-range properties.

“What does $1 million buy? It buys half of a four-flat in Lincoln Park or it buys a 50-unit building in Englewood,” Kiser said. “I think there’s a real opportunity to get good buys back in the neighborhoods where you’ve been boxed out for about the last 10 years because of cap rates.”

The opening panel touched on a number of other topics, from the liquidity of the multifamily market, Illinois’ population loss, acquisition financing through agencies, deconversion, amenities and of course, property tax assessments.

The panelists pointed out a number of different trends occurring in the multifamily space, depending on whether a development is rental or condo, downtown or in the suburbs.

“One of the most interesting amenities happening right now is activating the lobby with retail space,” Spadoni said. “When you make a direct connection inside from a coffee shop or a food vendor, it really helps enliven the lobby versus a static lobby that you just walk through.”

Pryde agreed, saying that it helps the building owner right-size their own amenities on offer and helps the residents connect with the surround community, and vice versa. Lev pointed out, however, that this trend may make sense in rental properties, but condo owners typically like more privacy and would rather not have non-residents inside their building.

The same dichotomy applies to square footage. “The ‘me’ spaces are getting smaller because the ‘we’ spaces are getting bigger,” Cook said, meaning developers are able to deliver smaller unit sizes because they are giving over much of their leasable space to shared amenities. Here, too, Lev pointed out that while apartments are trending smaller, new condos are growing in size.

The panelists covered a number of other topics, from Boomers driving Class A space, “Instagrammable” moments as a built-in amenity, modular construction, higher leasing volume in the beginning of the year and the adaptive reuse of malls, hotels and big box stores.

As announced last November, Fannie and Freddie’s maximum conforming loan limits in 2020 increased to $510,400, the fourth straight year that the Federal Housing Finance Agency increased loan limits after they remained untouched from 2006 to 2016. As Corbett pointed out, the agency’s budgets also increased.

“There has been a pretty significant change just in this past year. Historically the agencies had a lending cap about $35 billion with deals that fell into the affordable side or under our green programs were treated as uncapped.  They changed that in the fourth quarter of 2019. The FHA they put a cap overall on Fannie and Freddie, starting in the fourth quarter to the end of 2020, of $100 billion each.”

The panelists touched on a wide variety of other topics, from the rise of interest-only debt, the interest rate environment and financing alternative multifamily options like co-living properties or Airbnb hotels.