Four Reasons Why to Invest in Bronzeville Multifamily Right Now 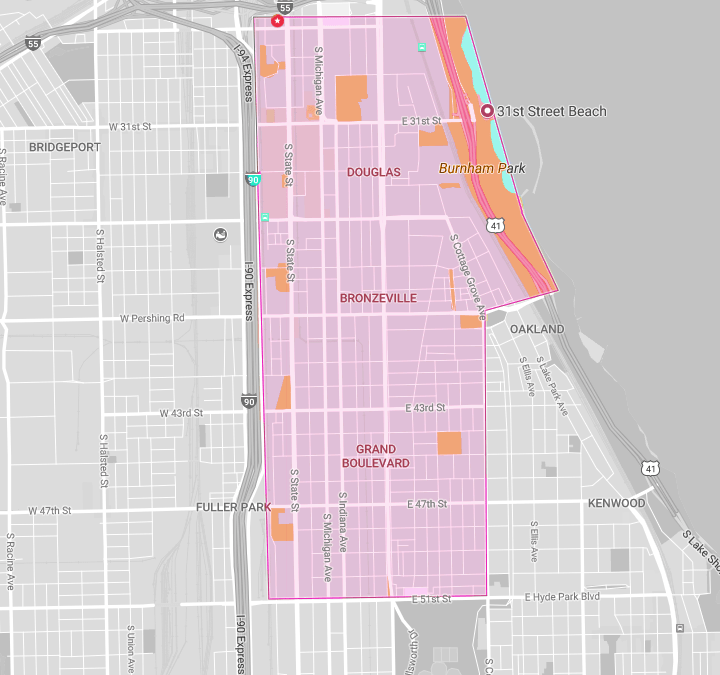 Bronzeville is a Chicago neighborhood spanning from 25th Street to 51st Street with Lake Michigan to its East and I-90 to its West.

As the South Loop and McCormick Square continue to experience a development boom, Bronzeville, the neighborhood to the south, becomes next to see increasing building prices and rent. Major  developments in the South Loop include The 78—a 10M square-foot mixed-use development, 1000M— a 74-story condo tower and One Grant Park—a 76-story apartment tower.

McCormick Square, which borders Bronzeville to the north, recently opened the Marriott Marquis Chicago, a $350M hotel, as well as the 10,000 seat Wintrust Arena. The Wintrust Arena is home to the WNBA’s Chicago Sky, DePaul University’s basketball teams, concerts, conventions and meetings.

Mariano’s, a major grocery retailer located on South Martin Luther King Drive and Pershing Road, has played a major role in Bronzeville becoming an up-and-coming place to live as well as being a catalyst for new jobs in the neighborhood. The Michael Reese Hospital site at 29th Street and South Ellis is also prime for redevelopment. Many included the closed hospital as a potential HQ2 site for Amazon.

Other developments in the neighborhood are welcoming more families including city-owned vacant lots that are being developed into 42 market-rate single-family homes. Last year, two developments opened: Chicago’s Arts and Recreation Center at Ellis Park on 35th and Cottage Grove and the 35th Street Bridge between Bronzeville and Lake Michigan. Earlier this year, the City broke ground on the 41st Street bike and pedestrian bridge and announced a $6M Field House in Williams Park.

Bronzeville is an underutilized and often overlooked market where the cost of entry is low. Large 2-bedroom units with condo quality finishes in Grand Boulevard are fetching between $1,400 to $1,500 per month. For Chicago’s South Side, this neighborhood holds high rents. Buildings in Bronzeville, depending on what pocket of the neighborhood they are located, are now selling for prices surpassing $100K-per-unit.  Even the most expensive unit in Bronzeville is still significantly cheaper than living in the South Loop.

The tenant demographic is also changing. More students, especially from Columbia University and Roosevelt University, are choosing Bronzeville. It’s more affordable than the South Loop, without too much additional commute time. People that work in the city and have families have chosen Bronzeville as their preferred place to live because of its stunning architecture and its history of being a neighborhood with a strong cultural influence.