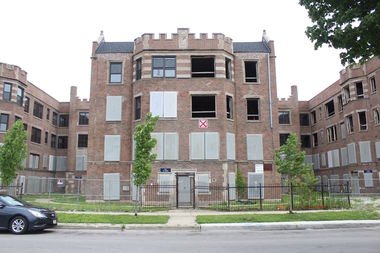 SOUTH SHORE — Long-vacant buildings in South Shore are getting new life as apartments as plans for the Jackson Park golf course and Obama library push forward a renewed interest in large rental buildings.

The latest announcement came at Tuesday’s 5th Ward meeting, where Chicago Urban Renewal Partners said it planned to buy 7109 S. Bennett Ave. and bring tenants back in for the first time in nearly 20 years.

Jon Garrity, principal with the developer, said he is in negotiations now to buy the building and bring it back on the market as 68 apartments.

He said he’s planning 53 700-square-foot, two-bedroom apartments. The remaining 15 apartments will be a mix of one- and three-bedroom units, with rents ranging from $750-$1,450 per month.

He said he expected tenants to move in by summer 2018. He declined to say how much he expected the project to cost.

It’s the latest vacant building to be snatched up by developers planning market-rate apartments.

On Wednesday, the Kiser Group said it brokered a $29 million package deal for 21 apartment buildings in neighborhoods around the proposed Obama presidential center site in Jackson Park.

“Chicago’s South Side has seen a huge pickup in demand recently,” broker Aaron Sklar said in an announcement of the sale. “Given the new developments such as the Obama library and the redesigning of the Jackson Park golf course by Tiger Woods, coupled with higher returns, we’re seeing large interest from both new and current investors.”

Amid worries about declining home ownership in South Shore, interest in market-rate apartments has been heating up, with landlords betting on higher rents with Jackson Park’s improvements.

The Zidan Management Group of Indiana is working on a $13 million plan to open 100 apartments in 2231 E. 67th St., a 16-story building overlooking the Jackson Park golf course that has been empty since late 2015.

The project follows the $11.5 million rehabilitation of Jeffery Towers Apartments at 7020 S. Jeffery Blvd. and the sale of four large apartment buildings for $9.5 million in 2015.