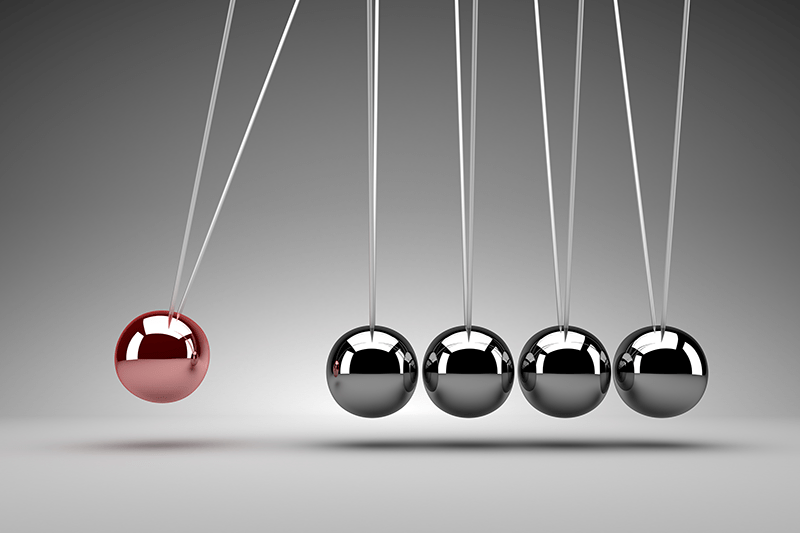 As we continuously examine the deconversion trend at Kiser Group, we look for as much information as we can to try to understand how much longer it will last.  We recently looked at our historical data to see how many of each year’s sales were conversions or deconversions out of our total multifamily sales, and we produced the chart below. 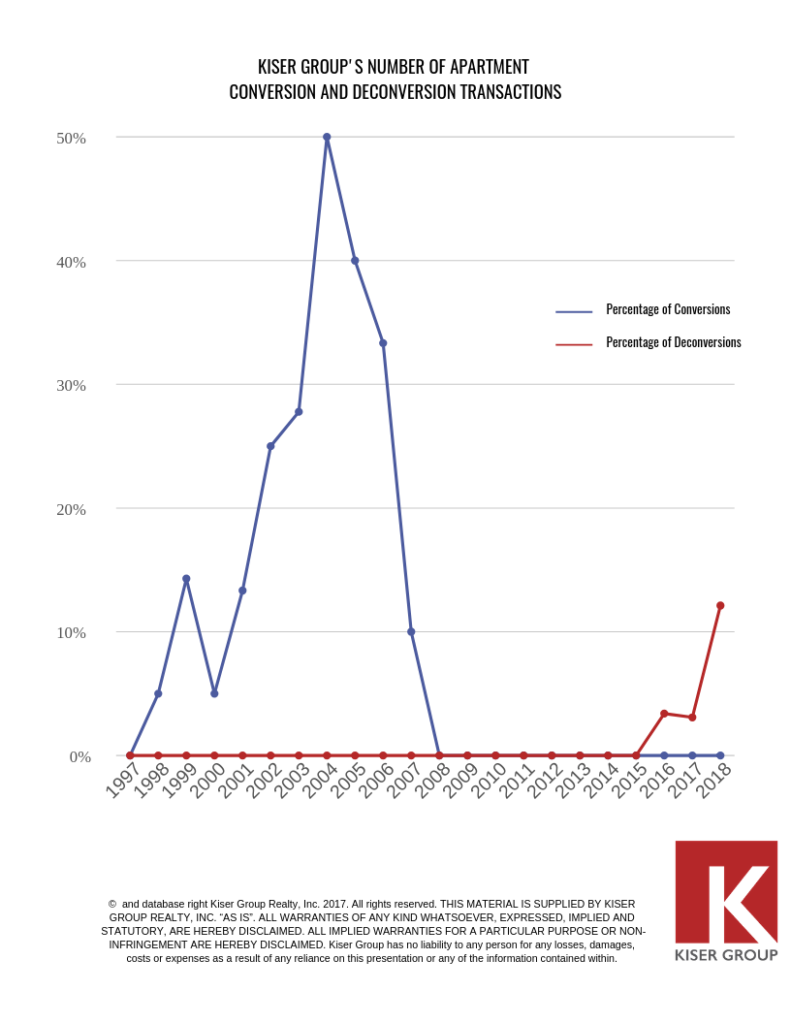 From 1999 until 2007, condominium conversions (the process of turning an apartment building into condominiums) were a very meaningful part of our business, and in 2004 represented exactly half of that year’s closings.  We brokered conversions for nine years, and the current deconversion (the process of turning a condominium building into an apartment building) trend is two years old.  One of the questions I am most frequently asked is how long the condominium deconversion trend will last.  It’s an interesting question, and the first thing to answer is how we got here in the first place.

In the 1980s and 1990s, condominium conversions were done by developers, but infrequently.  In response to the post-internet bubble recession in the early 2000s, the Federal Reserve cut interest rates aggressively, from a high of 6.5% in May of 2000, down to 1% in June of 2003.  This massive and rapid drop in the cost of borrowing money led to the housing bubble that we are all familiar with.  Underwriting standards went out the window, and anyone with a heartbeat could obtain financing for a home or condominium.  As condominiums are typically less expensive than a house and easier to maintain, they became a focal point of speculation and excess.

As home and condo ownership took off and people went from renters to owners, rent prices suffered and apartment building values were stagnant.  High demand for condominiums and a shortage of them led to increasing condominium prices.  A new equation was created where a given apartment unit was worth far more if it became a condominium, particularly in vintage (pre-1929) buildings.  Savvy developers began to purchase vintage buildings, gut rehab the building at a much lower per-unit cost than new construction, and sell the units as condos with lower price points.  An added bonus was the ability to do this in size, as many vintage buildings have thirty or more units.  As the margins on this activity were quite large, it did not take long for the rest of the world to notice, and soon enough, anyone who had ever picked up a hammer became a condominium converter.   Everything was a target, and many buildings that had no business being turned into condominiums were converted.

From June 2003 until June of 2006, the Federal Reserve raised interest rates from the low of 1% to 5.25%.  The housing market began to cool in 2006 and 2007 and collapsed in 2008.  Many condominium converters were stuck with large amounts of unsold inventory, and many went bankrupt.  To this day we encounter condominium properties where the converter still owns a meaningful number of units.  Individual owners who moved and were unable to sell their condos became landlords by default.

After the year 2009, which is literally devoid of commercial real-estate transactions due to frozen credit markets, the world slowly began to recover.  With the meltdown still fresh in the collective memory, those that would have previously purchased a condo opted to rent instead, and many former condominium owners were turned back into renters via foreclosure.   With renewed demand for apartments, rent prices have climbed considerably since the crash.  As apartment building values are primarily based on the rents they produce, their values have also climbed considerably.  While condominium prices have also increased since the crash, they have rebounded from very low levels and are often still below their pre-crash peak values.  The pendulum has swung back to buildings being worth more as apartments than as condominiums.

A very interesting parallel to draw here would be to a farm.  Farmers plant crops that they believe will make them the most money in the coming year.  In Illinois, the two primary crops are corn and soybeans.  When corn prices are stronger than soybean prices, more fields are planted with corn than soybeans.  Ultimately, this higher supply of corn suppresses its price, and lowered supply of soybeans increases their price.   Once soybean prices rise high enough, farmers begin to plant more soybeans and less corn.  In this regard, a multifamily building is like a field that can be planted with either condominiums or apartments.

In addition to the disparity in values between condo and apartment buildings, deferred maintenance has become a major issue.  As noted above, most conversions happened in vintage buildings, which if not properly maintained can “get away” from even seasoned apartment owners.  While most condominium buildings in Chicago are professionally managed by third-party companies, most of which do an excellent job, association boards don’t always follow their advice to the letter.  Special assessments aren’t a fun topic for a board to bring up, and the constant recommendations from management firms on maintenance can be viewed as things that can wait.  For the vintage buildings that were converted in the mid-2000’s, it is now a decade later, and the bills are starting to come due.  Associations can either make special assessments or take out loans to pay for maintenance.  Loan interest must be paid by raising monthly HOA fees, which immediately devalues each condominium in the building.  Some deferred maintenance needs are so severe that a deconversion is the only palpable solution to the problem.  Deferred maintenance is the second force acting on the pendulum.

So how much longer does it last?  As mentioned above, we are two years into a trend that is a reversal of a nine-year trend.  I believe that condominium values will catch up to apartment values first, putting the condo-apartment equation into equilibrium and ending the deconversions that are based on disparity of value.  However, deferred maintenance deconversions will last longer as buildings get older and unresolved maintenance issues get worse.  While they may not happen in great numbers, I believe that maintenance-related deconversions will be a permanent part of the multifamily landscape.  When the pendulum does finally swing the other way and multifamily buildings begin to switch again from apartments to condominiums, I’m looking forward to doing some conversions.