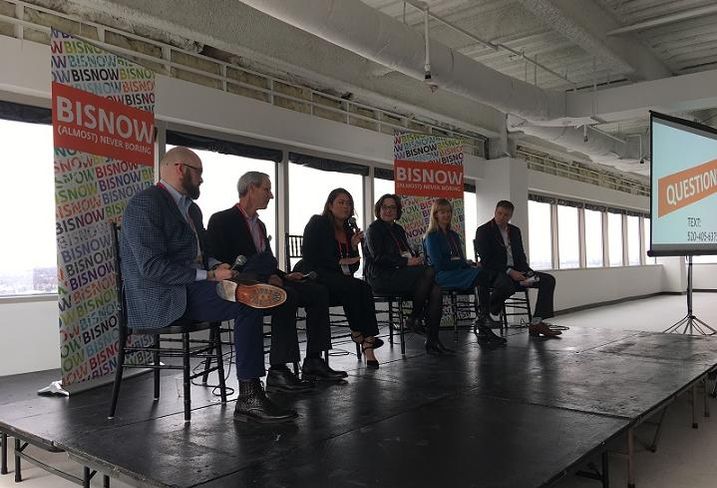 As big-name companies continue generating headlines by migrating from the suburbs into downtown Chicago, suburban real estate experts say we need a more balanced perspective. Chicago’s core may allow corporations access to a dense collection of young talent, but many suburbs also have vibrant downtowns recent college grads find appealing, and well-capitalized suburban landlords have created many Class-A properties with amenities that compare favorably with ones in the CBD.

“The general feeling is that the suburbs aren’t doing so hot, and we have to dispel that misconception,” WiredScore Chicago head  Christine Torres said at Bisnow’s The Future of Chicago’s Suburbs 2019 event Thursday.

Torres, whose firm rates the tech infrastructure of buildings, pointed to the recent decision by Chicago tech firm SMS Assist to open a new Naperville office at 2135 CityGate Lane for up to 400 employees as proof some firms would rather take advantage of the far lower suburban rental rates than expand in the city.

“One of the big challenges for the suburbs is perception, so somehow the suburbs need to get together and craft a unified message,” Wright Heerema Architects principal Roger Heerema said.

Many people still believe the region is littered with nothing but decaying corporate campuses and obsolete towers, but Heerema’s firm helped transform several bland, 1980s-style suburban properties into modern offices, including OfficeMax’s former headquarters at 263 Shuman Blvd. in Naperville.

The 350K SF complex was built for AT&T in 1987, but after Franklin Partners purchased it in 2018, Heerema began adding a grand staircase to the main lobby and atrium, a well-lit lower level with a coffee bar, a full fitness club, coworking lounges and other amenities found in Class-A Chicago high-rises.

Many significant office tenants like what they see in the suburbs.

Paylocity’s 2016 decision to relocate from Arlington Heights to more than 300K SF in Schaumburg Towers, the site of Bisnow’s conference, illustrated even firms with young workforces don’t need an urban headquarters.

GlenStar Properties Managing Partner Rand Diamond said his firm specializes in bringing once-moribund suburban properties back to life. It bought Continental Towers in 2013, when the 911K SF complex in Rolling Meadows was just over 50% occupied, poured in $23M worth of improvements and brought occupancy up to 93%.

But he advised conference attendees not to get too wrapped up in the suburbs’ feel-good stories.

“There are many areas in the suburbs that are not doing very well,” he said.

The main difficulty in suburbs is how to find uses for smaller office properties. Not only have many not gotten updates in decades, the prospects of that ever happening are dim. Buildings of this scale don’t have the space to include the kind of Class-A amenities considered essential by tenants most focused on talent recruitment and retention.

“Some are going to get torn down, and some will just end up as Class-C offices,” he said.

Massive complexes, such as Continental Towers and Schaumburg Corporate Center, a three-building, 1M SF complex GlenStar bought in 2017 for $70M, have the space, and can attract enough capital, to make it in the modern era, Diamond said.

“These properties will get financing, and they’re going to thrive. That’s what our company is betting on.”

Somerset Development Vice President of Acquisitions and Development Ken Gold said before his company decided to remake AT&T’s former campus in Hoffman Estates, it looked at a lot of office properties in the region, and found many had outlived their usefulness. The cost of renovations would be prohibitive in many cases, and even demolition followed by new construction would not work, as the suburban rents would not justify that level of investment, he said.

A select group of suburban offices will become mixed-use communities, he said. Somerset plans to transform the 150-acre AT&T campus into 1.2M SF of offices, 60K SF of retail, 80K SF of conference space, a hotel and hundreds of apartments and townhomes.

Transforming obsolete properties could require significant investments in new infrastructure, and some panelists worry local governments could struggle to secure the necessary funds.

Abbell Associates CEO Liz Holland said in an era of retail bankruptcies and mass store closings, the many suburban towns that rely on sales tax revenue may have to tighten their belts.

“This is going to put a lot of pressure on municipal finances.”

That could eventually mean higher suburban taxes, but Diamond said he isn’t worried. Tenants typically are most concerned with their gross rent, and with suburban gross rents still in the $30s, Chicago’s periphery will remain affordable for the foreseeable future.

“Chicago is still a relatively affordable city, and the suburbs are a bargain,” he said.

But not all suburbs are created equal when it comes to fostering new development.

As Diamond looks ahead for the next five years, he expects builders to launch more projects in the largest suburban towns, such as Schaumburg and Naperville, due to their transparent and orderly development processes. Some of the smaller ones seem to have trouble following their own guidelines, something that he considers a hallmark of Chicago as well.

“You think you know the road map, but it constantly changes.”