Apto: Looking where others don’t: An interview with Noah Birk, Kiser Group 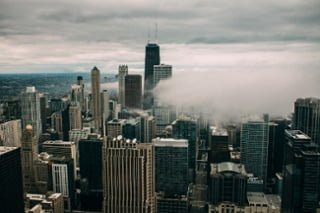 When everyone else zigs, you should zag—or so goes the old saying. This month, we spoke to one Chicago-based broker, Noah Birk, who’s proving just how successful that strategy can be.

Birk, the director at Kiser Group, has rapidly grown his book of business by focusing on an area of the city that many people overlook. He started in the CRE industry nearly seven years ago, as a college graduate, and found success by focusing on the disposition of apartment buildings on Chicago’s South Side. Today, he’s the area’s most active broker.

We asked Birk how he got to where he is today, and here’s what he had to say.

What drew you to CRE?

“I was interested in real estate at a young age. Growing up, my father owned a few smaller properties, and I would do physical labor on those with him pretty often. I loved the idea that each property was a business in itself. I knew I wanted to own buildings someday, and always saw brokerage as an ideal jumping-off point for that. I started right out of college. I didn’t want the normal 9-5 job; I needed something where there was a direct correlation between hard work and success. I’ve always appreciated the ‘eat what you kill’ type of mentality.”

“I’m still one of the younger brokers you’ll meet, but I’ve been doing this for a lot longer than many other brokers in Chicago. Most people that get into commercial real estate start in their 30s, and age can give you some instant credibility with a lot of clients. I started as a 22-year-old in a field dominated by people who had been doing this for as long as I had been alive.”

“I’ve never really been the most talented at anything, but I’ve always been confident that I could put more effort in and outwork anyone. I knew that was the only way I’d be able to separate myself when I started. So that’s what I did: I tried to make sure I was making more phone calls than anyone else and meeting with more building owners than anyone else. Showing clients my work ethic was my way to build credibility.”

“The beginning is an absolute grind. I’m thankful I had a lot of seasoned brokers to learn from around me at Kiser Group. I also was really blessed to have a mentor like Lee Kiser at the beginning to guide me through the early stages.”

You focus on a part of the city others have overlooked. Could you tell us more?

“I focus 100% of my time on the South Side of the city. It’s full of beautiful buildings with incredible people, but unfortunately all most people see in the news are its negative aspects. As such, most brokers overlook the opportunity the area presents.”

“I’m one of very few brokers who puts all of my attention there. This allows me to build stronger relationships and understand exactly what’s happening on a day to day and a block to block basis throughout the South Side. I spend most of my time in South Shore, Woodlawn, Washington Park, Chatham and Bronzeville.”

Why did you choose to focus on this area?

“To me, it was an untapped area. I just saw so much opportunity on the South Side, and I wanted to be a part of it, so I made a run at it. When I started down there it was the absolute bottom of the recession. The area was facing hard times, but it’s been exciting to watch it stabilize and strengthen over the past few years. It’s still very untapped in many respects, but it’s growing rapidly, and I’m thankful to be a small part of its growth.”

Could you tell us about your first deal?

“Wow…I didn’t cash a check for 366 days after I started in brokerage. There are so many hours of work that need to be put in. You have to be willing to grind it out.”

“The first listing I ever had was this little 6-flat. When I got that thing listed, I think I called every person who’s ever bought a piece of real estate in America to make sure they knew about it. When we ultimately put it under contract, it was probably the most contentious deal I’ve ever worked on. Every single aspect of the deal was a heated fight between the buyer and seller. The $500,000 building almost fell apart the day before closing over a 10-year-old washer/dryer…it was that kind of deal.”

“In general, I probably end up closing one or two buildings every other week. We do anywhere from 6 units to 500 units, and it varies greatly between each deal. I’m working on a roughly 400-unit portfolio spread throughout the South Side that’s under contract for almost $30 million dollars, a nearly 100-unit portfolio in Chatham, and several smaller 6-20 unit deals. It’s always something new every day, it definitely keeps you on your toes.”

What do you think has contributed to your success?

“I really just try to be there for my clients. Call me at 1AM, call me at 9PM, call me at noon, I’ll pick up and try to figure out how I can help. My goal on every deal is to serve my client with my and my team’s best effort. I’m far from a perfect broker, but I will do everything in my power to make sure my client is happy at the end of a transaction. I think that mentality resonates with a lot of clients, and I like to think that’s why I’ve been able to grow in this business.”

What advice would you give to brokers coming into this business?

“You really have to be willing to grind hard, especially when you’re starting. Brokerage is all about building relationships and building trust with people—which could mean closing deals months or years down the road after an initial meeting. If people like you and trust you, ultimately, they wind up coming back to you to do deals. But building that trust can take years, which is why a lot of brokers tend to fizzle out early on.”

“It’s cliché, but honesty and integrity go a long, long way in this business. Even in a city as big as Chicago, everybody (especially in multi-family real estate) knows each other, and if you carry yourself in a manner that shows a lot of integrity and honesty, your reputation will spread quickly. But if you do the opposite…that negative reputation will spread even more quickly. A reputation for not being trustworthy is the kiss of death in any business.”

“You can’t have a “deal to deal” mentality. There are so many opportunities to tell clients what they want to hear but it’s important that you’re able to tell a client what they need to hear. There’s no such thing as a shortcut: if you try to take one, I’ll almost guarantee it will come back to bite you. It’s always worth it to put in the time, and put in the effort for a client. It will pay off in the end.”